It’s springtime.  The “Baby Chicks are Here” signs are up.  And every Thursday morning,  the local feed store gets 300 chicks.  By Thursday afternoon, almost all the chicks are gone.  By Thursday night, there’s not a single one left.  Isn’t that crazy?  Every week in early spring, hundreds of chicks are given homes in the backyards of the Texas hill country.  Sometimes I feel like I’m the only one crazy enough to keep adding chickens to our homestead every year.  But, apparently, I’m either not as crazy as I thought or there’s a LOT of crazy people living within a 30 mile radius of that feed store.  Like every year, this spring, my chicken-crazed kids had asked to raise another batch of chicks.   There was no way I could say no when my eldest daughter handed me a glass milk jar filled with money.  Without me knowing it, she had been saving for her very own Golden Laced Polish chickens for weeks.  Well, if we were going to do this, again, I wanted my husband’s help picking out the healthiest dozen.  So, on a Tuesday night, I opened the calendar on his laptop left on the kitchen counter and added “Chickens” at 8 a.m. on Thursday, March 10th.  Our alarms sounded early that day so we could be outside the feed store well before opening.  Believe it or not, there’s often a line of people waiting for the store to open on chick day.  As we pulled into the parking lot, my husband started getting texts from his confused ER residents wanting to know what “Chickens” at 8 a.m. meant.  Oh no!  Somehow I had added it to my husband’s shared Google work calendar instead of his personal one!!  One text was a photo of the ER resident schedule, and indeed every resident had been alerted that there was “Chickens at 8 a.m.”  Our children thought mommy’s mistake was hilarious and so did I!  Moments later though, our smiles turned to frowns when the clerk unlocked the front door and told us the chicks had come in yesterday, a day early this week, and were already sold out!!  Later in the day, a resident had a quick exchange with my husband that went something like:  “Did you get your chicks?” says resident.  “No, sold out,” says sad husband.  “Of course they were, we all knew it was time to get us some chicks.  Next time don’t put it on our calendar, and maybe there’ll be some left for you!” jokes resident.  Well, my husband and I don’t like to wait when our mind is made up to do something, so that morning, we drove straight home and ordered one of the last batches available directly from a hatchery (yes, you can mail-order live chicks).  Mission accomplished — our chicks are on their way.  And, my husband’s ER residents happened to learn an important lesson of the day should they ever franch, “Chicks sell out fast, and you better have a good plan to get them before they’re gone.” 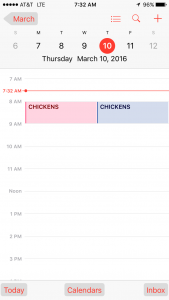