If You Only Want A Sentence, You Better Say So

My husband is responsible for teaching medical students and residents on how to be emergency medicine doctors.  Reading our stories of life on the franch, you may be thinking of how you want to know which ER he’s at with plans to avoid it.  But, he’s actually really, really good at keeping people alive!!  So, these students of his know a lot about how to save your life and also a lot about our life on the franch – some like to hear the stories and those who don’t certainly act like they do because, you know, there’s a written evaluation at the end of every shift.  Recently, a resident emailed my husband & asked for a franch update to be published in their upcoming residency newsletter.   I don’t know that my husband has ever responded to an email from a resident so quickly.  He was so honored.  And, this is what he wrote,

“Howdy.  I appreciate being able to give an unforced update about the franch.  Usually I force people to listen while I tell them about the franch.  So, the cows are bred and growing their babies well.  However, my daughter realized one of the cows isn’t ours.  When we took them up to a ranch with a bull, we got the wrong one back.  My daughter feeds them and has quite the attention to detail and figured out the one black and white one looks much different from the other black and white one.  The goat is milking.  She still limps a bit from the leg injury/sepsis thing, but the milk tastes good.  I’m trying to get back into the cheese thing, but the lousy goat baby keeps drinking all my milk.  The blind goat is now living large in Houston.  He sure made out pretty well.  Pretty lucky to be born blind, or he’d be at market a long time ago.  Instead he lives as a mascot, wearing funny hats at a vet’s office and goes by the name Capt. Jack (see attached image).  And don’t believe the lie that sheep eat quietly and serenely in a pasture.  We got this one loud sheep that is so loud I can’t hardly take it anymore.  I just wasted a thousand dollars on hay.  I bought the hay because the stuff looks really good.  Well, the cows won’t eat it.  Everyday, I spend time trying to trick the cows into eating this hay.  I put it in different feeders.  I mix grain/other hay into it.  I yell at the cows over and over to eat it.  These bales are huge round bales, so there’s a real problem of what to do with this stuff.  If anyone wants some really cheap hay, now is the time to offer me a really cheap price.  And that’s all there is to know about life on the franch.”

The resident responded, “I was actually only looking for one, maybe two, sentences.” 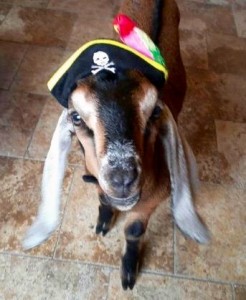