Do you Want the Good News or Bad News First?

You probably dislike being asked that as much as me.  I’d prefer not to be given a choice – just hurry up and tell me.  Research says most people want to hear the bad news first because people feel better getting the bad news out of the way and ending on a good note.  On the other hand, the same research says the deliverer of news is more likely to tell you the good news first.  You’re not here to answer for yourself, so I’m going to start with the good news.  Our once badly injured Nubian goat is now a mother to three beautiful triplets – two girls and a boy!  Now here it comes – the “but.”  The bad news is the boy is blind.  “Come on!” I cried when his lack of sight became clear.  We went through so much getting this mama goat through her pregnancy.  Now this.  How in the world are we going to raise a blind goat?  At first we decided that we’d leave his fate up to nature and see what happens.  But, mama goat knew immediately something was wrong with her boy, and chose to give all her attention to her girls, leaving him be.  Desperate to find a teat he would wander the pen with his neck stretched up and sucking at the air and anything he bumped into.  Mama would kick him away when we positioned him near a teat even though her udder was swollen with nourishing colostrum.  He wasn’t going to do well left to his mother’s care.  Our children reminded us of visiting Winter in Florida from the movie Dolphin Tale – an unbelievable true story about how Clearwater Marine Aquarium didn’t give up on a dolphin that lost its tail and fitted it with a prosthetic one.  Inspired, we agreed that maybe finding a seeing-eye dog for our blind goat shouldn’t be totally out.  In the end, there was no way we could let him starve.  So, we milked mama goat to fill the first of many bottles to come and my son named him Vitruvius after the blind wizard in The Lego Movie.  We still don’t know what we’re going to do with our blind goat.  Maybe you have some good news for me and you’ve been looking for years for a blind goat? 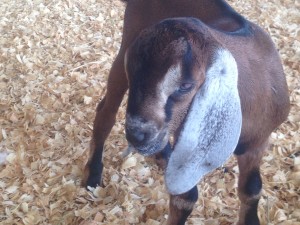