Grace is something we say in our family before every meal.  “Saying grace” refers to the practice of thanking God for the food before us.  It is actually one of the most common forms of spoken prayer and is a tradition among all the major world religions.  I grew up saying the common lovely Catholic grace “Bless us, O Lord, and these thy gifts which we are about to receive from thy bounty, through Christ, Our Lord. Amen.”  Now,  in our family, the prayer of thanksgiving we’ve chosen isn’t written out for us – instead, we take turns thanking the Lord for our food and for His provision in other ways as well.   It is said three times a day and sometimes before snacks.  You know what happens when something is said over and over again, each time similar to the time before.   It’s often expressed without full attention, without thoughtfulness, and even without comprehension of the meaning of the spoken words, and definitely without sincerity.  It was happening in our family – made obvious by the recent comment of our five year old, “The people who don’t believe in God are lucky because they get to eat their food sooner than me.”  Then, we butchered the first lamb born on our franch.  And a lamb who had a name was on our plate.  Bow your heads with me as our family says grace with utter sincerity. 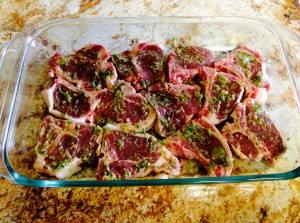