Act Before You Think

You might think I have it wrong…it’s “Think Before You Act.”  Not when it comes to snakes in Texas.  We live in the state that is home to 15 venomous snakes.  One of the rhymes we teach in kindergarten is, “Red on yellow kills a fellow. Red next to black is a friend to Jack.”  This helps you distinguish between a venomous coral snake and its harmless relatives.  Learn it before you come visit.  Well, I don’t want my children standing in the path of a snake visiting our franch trying to remember how the rhyme goes…and getting it wrong.  So, I instruct, if you see a snake, “Don’t think, run.”  Correction: “Get your little sister, and then run.”  So far, fortunately, only my husband has had an encounter with a snake on our franch.  The story goes…  He had been sick all day and of little help with the franch chores.  The only chore left was to close up the chickens for the night and he was looking much better, so he offered to do this final task.  Where was he, I wondered, twenty minutes later?  I found him red-faced, with his shirt soaked in sweat, and completely out of breath.  Seeing him, I had chuckled at first, “What could have possibly happened in a chicken coop?”  A 5 ft long snake stretched out along the nesting boxes and up along the wall, that’s what!   Eeeeeeek!!!  My husband instinctively grabbed the nearest shovel; he thrust it in the snake’s direction yet missed several times, it slithered here and there inside the coop, and then, after several harrowing minutes, he finally killed it. The next day, he and the children went out to identify its remains.  The older two children exclaimed, almost in unison, “Awww, dad, why’d you kill it? It’s not a bad one.”  Indeed, it turned out to be a harmless chicken snake.  It eats chicken eggs, and we have plenty of ’em.  Perhaps, my husband should have first consulted the Identification Guide of Texas Snakes in our kitchen drawer before taking lethal action.  But, little hands gather eggs every morning and every evening.  Sometimes, it’s okay to act before you think. 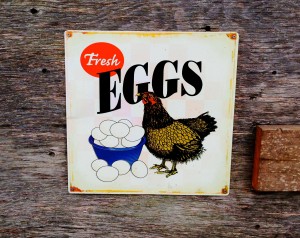 We need to stop advertising fresh eggs on our chicken coop just in case snakes can read.

Not on a Franch