The Birds and the Bees Hijacked by a Buck

The kids want to read mommy’s blog.  Since the franch is their life too, they are allowed.  So, I’ll speak in code.  Us parents dread the day that will eventually come when it’s time for the birds and the bees euphemism in the lives of our children.  We don’t want to prematurely tell.  But, we also don’t want it to be learned too late either.  Often, it’s time when children come home asking questions about what was whispered on the school playground.  For those raising children on the farm, the time comes when you realize your kid thinks there’s a breeder named Burt involved for us too.  On our franch, it was time for the birds and the bees when a buck arrived.  Except, he didn’t give us a chance to tell.  His name was “Stinky Pete” and he wasted no time unveiling the truths as soon as he was unloaded from the trailer.  He was ready to re-tell the story over and over again just in case they didn’t get it the first time.  We soon returned him to his owner who reported that Stinky Pete went missing and was maybe later picked up by police, as there was rumor of an unclaimed buck at the station.  I wouldn’t be surprised if he got charged for being indecent.  Tell your children about the birds and the bees before a buck does. 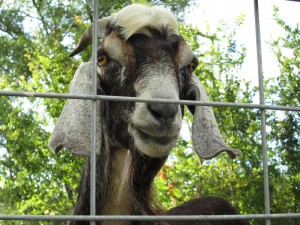