Love (And Little Sleep) Can Make a Fool Out of You

It was the weekend of the county fair.  Our kids look forward to it every year.  My son says it’s “like a holiday” for him.  We were on our way to the midway with the handful of rides spaced out nicely so to a small child it’s a grand experience.  My husband reached out his hand to shake the hand of someone who was only vaguely familiar, and said, “Listen, man, I was coming off of a series of night shifts and hadn’t slept for 24 hours.”  My husband then laughed, clearly at himself.  The young man seemed to be thinking about what to say.  He glanced at our children and then made eye contact with me.  What my husband said and the reaction to it was enough for me to recognize him as the new technician at our vet office.  Weeks prior, this poor guy witnessed my husband lose it over having to make the choice to euthanize one of our sweet and very loved baby goats.  It had been the third day of trying to relieve some unexplained swelling of her head and face so severe that her eyes were swollen shut and her breathing was labored.  We still don’t know the reason, though the vet guessed it was a horrible reaction to a spider bite or snakebite.  Even though she kept getting worse no matter what the vet tried, for some reason, my husband never considered the possibility that she would die.  Exhausted from seeing patients all night and teaching residents all day, my husband had arrived at the vet office ready to quickly discuss the next day treatment plan.  He wasn’t prepared to walk in to see her gasping for her final breaths.  So, my husband was remarkably emotional over the loss.  A day later, after a good night of sleep, he felt silly about his overly dramatic response to the death of a goat.  So, I said to the vet tech in a disbelieving and playful tone, “I heard it was rough after that goat died.  Did he really open the cardboard box you handed him afterwards and quietly stroke the hair of our dead goat?” “Yep, he did,” he relaxed and laughed politely with us, and then went on to encourage, “Listen, I get it, we all have days like that…” Later, my husband and I laughed some more about the whole thing, not about what the vet tech did say, but what he didn’t say – such as “it wasn’t that bad” or “listen, I often see grown men cry after a goat dies in their arms.”  We know it’s not really funny.  “It’s kind of embarrassing, dad” suggested our pre-teen daughter.  I say it’s sweet that my husband cares so for our animals and, more so, for our children who love them.  The vet staff apparently felt very sorry for my husband that day and so, a week later, sent a handwritten note with words of sympathy addressed to him like “she is now frolicking in ever green fields,” “she was no doubt a fighter,” and “you gave her the best care but know she’s in a pain-free place now.”  I don’t want to pick on my husband too much.  Honestly, none of us handled it well.  The kids and I shed milk buckets of tears behind our barn as we buried our young goat friend in the back corner of our pasture.  It doesn’t matter how tough you think you are, you would’ve foolishly cried over a goat you didn’t know listening to our children say their final words and prayers beside her resting place.  A week or so after the sympathy letter, a second envelope arrived from the vet office.  It was the bill.  For $ … well, let’s just say… it made us feel foolish.  It was way more than you should ever spend on a goat no matter how much it’s loved.  Unless you don’t mind being a fool.  Which we don’t. 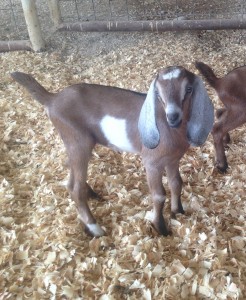