My husband grew up on a dairy farm and milked twice a day every day for years.  So, I think we all can agree that he can call himself a farmer.  I wonder sometimes if and when I get to say that I’m a farmer or a rancher.  Is it a certain number of experiences or more the kind of experiences?  Or is when I log an exact number of hours spent doing what you think of when you think about farming and ranching?  Is it when I weep over the loss of a calf at birth?  Is it when I milk a goat twice a day, not just once, but for months?  Is it when I spend hours with a new mama goat so she lets her newborn babies latch on to her sore teats?  Is it when I unload fifty bales of hay or carry thirty bags of feed?  Is it when I know the exact cuts I want the butcher to do?  What about when I can back up a trailer into a narrow space (it’s harder than you think!)?  How many main and side dishes do I need to make from our food raised in our garden and in our pastures?  How many muck boots do I need to wear out before I can say I farm or I ranch (I think I’m on my sixth pair)?  Or is it simply enough that I’ve daily cared for horses, cows, sheep, goats, chickens, ducks, dogs, and cats for several years now?  Yesterday, I separated a single sheep from our flock, which isn’t an easy feat on your own.  I could’ve used a border collie who knows how to herd…hint, hint (that’s a hidden message to my husband who’s still reading his how to train herding dogs book).  I then loaded the lone sheep onto our trailer without a hitch.  I knew my husband left for work not thinking I could do it.  So, I proudly texted before I started out driving our farm truck and trailer to meet up with him, “Who’s the farmer’s wife now?”  But maybe I could’ve left out “wife?”

Darkness is settling on the franch.  I click on the flashlight.  “Where is…that…chicken?”  I’m tired tonight.  My eldest daughter beside me doesn’t mind that we’re still searching since its way past her bedtime.  The missing chicken has been nameless for a few weeks.  It was once called Jayda after my daughter’s sweet girl friend.  But, that was when we thought all the chicks in our latest batch were hens.  You see, we had mistakenly ordered a “straight run.”  For those of you who don’t know a thing about chickens, that means “just as hatched” and “not sexed.”  Or, to put it another way, ordering a “straight run” means you may be back at the grocery store buying farm fresh eggs when all your chicks turn out to be roosters.  Roosters don’t lay eggs no matter how much you spent on your trendy chicken coop.  We began to suspect that we had a rooster when the chick grew a big red comb and wattle.  When the crowing began three months later, we knew for certain.  We’ve never had a rooster and we didn’t want one – it was time to find him a new home.  It’s hard to give him up though – the new batch of chicks were a birthday present to our youngest daughter and he’s turned out to be really friendly.  He certainly does what roosters do.  He is very, very eager to start the day as early as possible.  But, I find the crowing peaceful – maybe I am made to be a farmer after all.  The only thing that really frustrates me about him is that he can’t find his way back to the coop at night.  I tell my kids that I don’t think he’s very bright.  My kids tell me he just needs a haircut.  He is a Polish Top Hat chicken with a very full bouffant of feathers on his head.  So, I must admit that he may keep getting lost simply because he can’t see through all those feathers.  But, come on, am I really supposed to give a chicken a haircut?  And, to make matters worse, ever since the rooster arrived, some of our older hens have chosen not to return to the coop for the night.  Maybe they’re all love-struck hoping for a late night rendezvous.  So every night lately we play a game of seek-n-find with our rooster and some hens.  Some nights they’re all over the franch.  We’ll find hens wandering the pasture in the dark.  There’s one hen that loves to hide in the overgrown asparagus bush.  Sometimes we find them all roosting in our peach tree.  Tonight, we finally locate the rooster and a few hens trying to sleepover with the ducks.  I tell my daughter on the way back from hand-carrying them to the coop that these searches remind me of the “Where’s Waldo?” books by Martin Handford that I liked growing up.  We agree that Waldo is the perfect new name for our wacky rooster!  I ignore my daughter when she mentions we should order one of those Waldo books from Amazon – I’ve had enough of looking for Waldo. 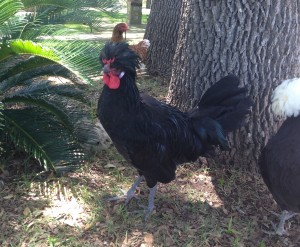 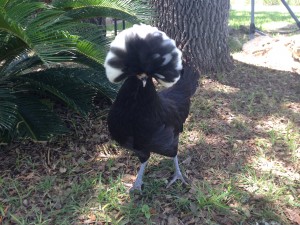 One of Waldo’s Lady Friends